The Battle To Return Moctezuma’s Headdress to Mexico 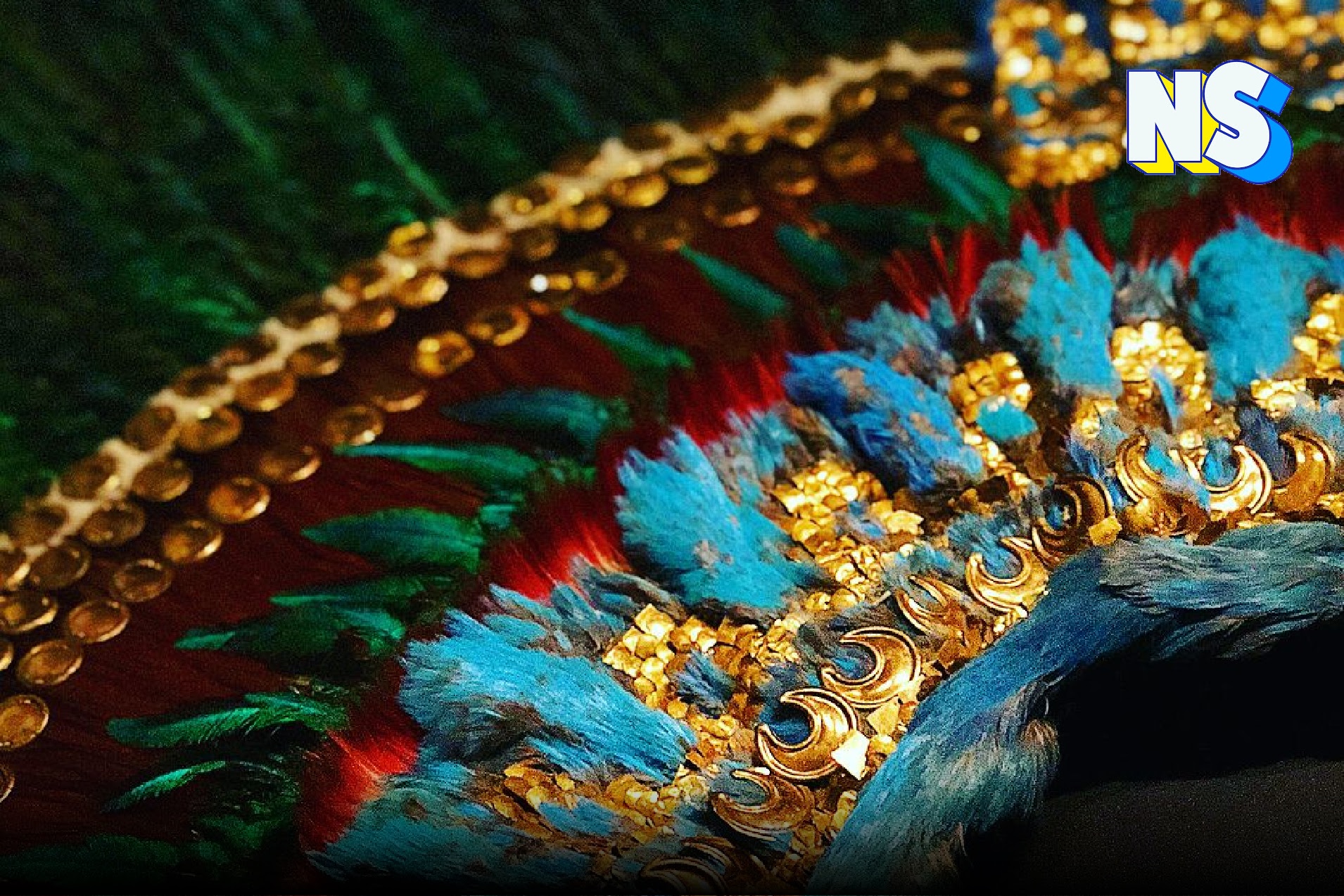 Moctezuma's headdress has been the subject of a dispute between Mexico and Austria for more than 30 years.

It is a headdress of quetzal feathers set in gold that is currently in the Museum of Ethnology in Vienna, Austria. However, the popular tradition assures that the plume belonged to the tlatoani Moctezuma Xocoyotzin (1466-1520), even though there is no historical certainty in this respect.

The headdress of the emperor

Moctezuma II Xocoyotzin was the de facto emperor of the Mexican empire between 1502 and 1520. Moctezuma went down in history for the maximum territorial expansion of his kingdom and for being one of the most important military figures in the history of Mexico. However, his name would go down in the colonial history books for personifying the first diplomatic contact between a European nation (Spain) and an indigenous American empire.

In the spring of 1519, upon receiving news of strangers' arrival on present-day Mexico's east coast, on the beaches of Chalchihuecan in the present-day state of Veracruz, Moctezuma sent ambassadors led by five Mexica nobles to investigate the accounts. Following his detailed instructions, the emissaries carried three sets of attire: one associated with Tezcatlipoca, one with Tlaloc, and one with Quetzalcoatl. Each Nahuatl god had specific elements of dress, and Moctezuma believed that Cortés might be related to Quetzalcoatl, considering the prophecy that said, "from the east will come white and bearded men."

Moctezuma thought that if the Spaniard allowed himself to be adorned with his attributes, it would prove that such a relationship was true since no one would dare to allow himself to be so adorned without being authorized to do so by the deity.

Cortes, for his part, was pleased when he was dressed in the costume of Quetzalcoatl.

The rest is history.

Moctezuma Xocoyotzin gave in to Cortes' requests, as he could not assemble an army large enough to defeat him. His 400 men with 40 horses and more than 3000 Tlaxcalan allies were housed in the sumptuous palace of Axayácatl. The images of the Mexica gods were torn down and replaced by Christian images, the blood of the sacrificed was washed away, and human sacrifice was abolished.

The Spaniards were given many gifts, and it is supposed that, among others, they were given the plume now known as Moctezuma's headdress.

From Mexico to Europe

Although it is not yet known for sure whether the piece in the museum in Vienna is Moctezuma's plume, it is known that the headdress was a gift from Hernán Cortés to the Spanish King Carlos I.

The German Mexican historian and researcher Carmen Cook de Leonard stated that this piece is only one of many plumes Moctezuma owned. It is not a unique and irreplaceable piece. Moctezuma possessed many riches and used different ornaments like this one.

The plume was among the 158 Aztec pieces Cortés gave to the king. These pieces were inventoried and sent to Europe, to Germany, where the king was residing at the time.

It was first mentioned in a European inventory in 1596 when it was acquired by the Austrian Archduke Ferdinand II of Tyrol.

Moctezuma's headdress remained in the castle of Ambras, owned by the archduke for 200 years until it was found by the Austrian geologist Ferdinand von Hochstetter.

The piece was discovered, restored, and used as a symbol for the Museum of Ethnology in Vienna. 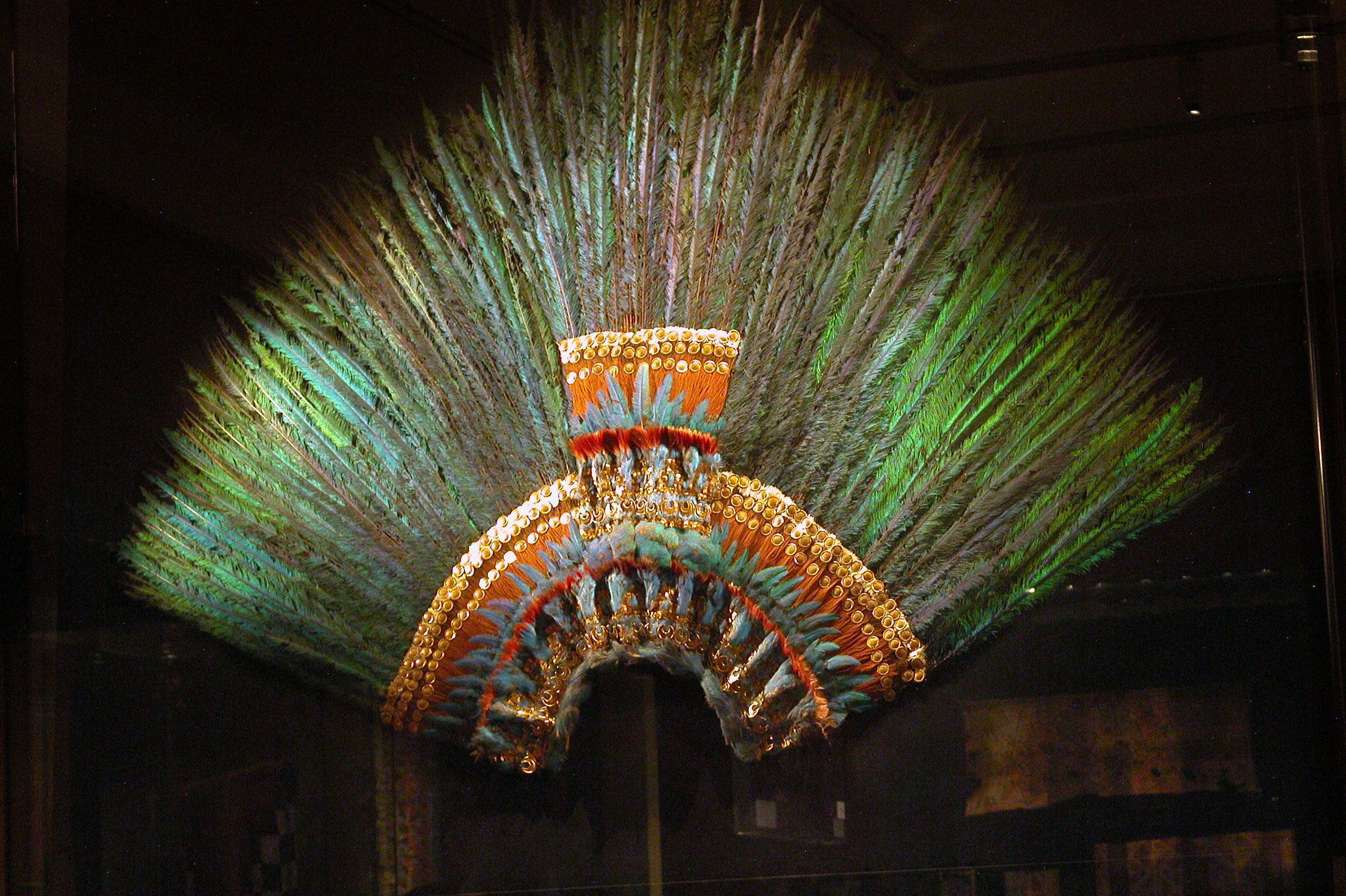 The treasure of Mexico

Moctezuma's headdress represents the identity of Mexico, not only for its historical value but also for its creation techniques that are still used today. Each piece that composes the plume is a landmark of the country. It was made by the amantecas, who were Aztec artisans who specialized in the art of feathers. The outer headdress is adorned with 500 quetzal tail feathers arranged in a semicircle. A green bow with a mosaic made with the feathers of the quetzal's body and other birds such as the cotinga, roseate spoonbill, and cayana piaya, gold ornaments sewn to the feathers and arranged in rows complete the design.

Light as a feather

The Spanish conquest left much damage, including the theft of pre-Columbian art that can be found throughout Europe.

Since 1991, Mexico has requested the return of Moctezuma's headdress. In 2011, an exchange between the headdress and the gala carriage of Maximilian of Habsburg was agreed upon, but it did not happen.

More recently, President Lopez Obrador wrote a letter requesting the return of other indigenous objects in commemoration of Mexico's 200 years of independence. Some of the requested things are the Aztec two-headed serpent in the Museum of London, the Codex Borbonicus in France, and the illustrations made by Tlacuilos, the ancient Aztec illustrator containing testimonies about indigenous life and cosmogony.

The curator of the Weltmuseum in Vienna said that Moctezuma's headdress could not be moved due to its fragility. For this reason, the headdress was not exhibited for years until 2017, when it became the centerpiece of the exhibition dedicated to Mesoamerica. Experts assure that if the headdress is kept in optimal conditions of light, microclimate, and vibration control, it will last another 500 years.

In February 2022, a group of Mexican activists hacked the Vienna Museum, where the headdress is currently on display, demanding its return to Mexico when conditions are met.

A replica of Moctezuma's headdress was created and installed in 1940 at the National Museum of Anthropology in Mexico City. In the meantime, it is not known if the piece will ever return to its place of origin.