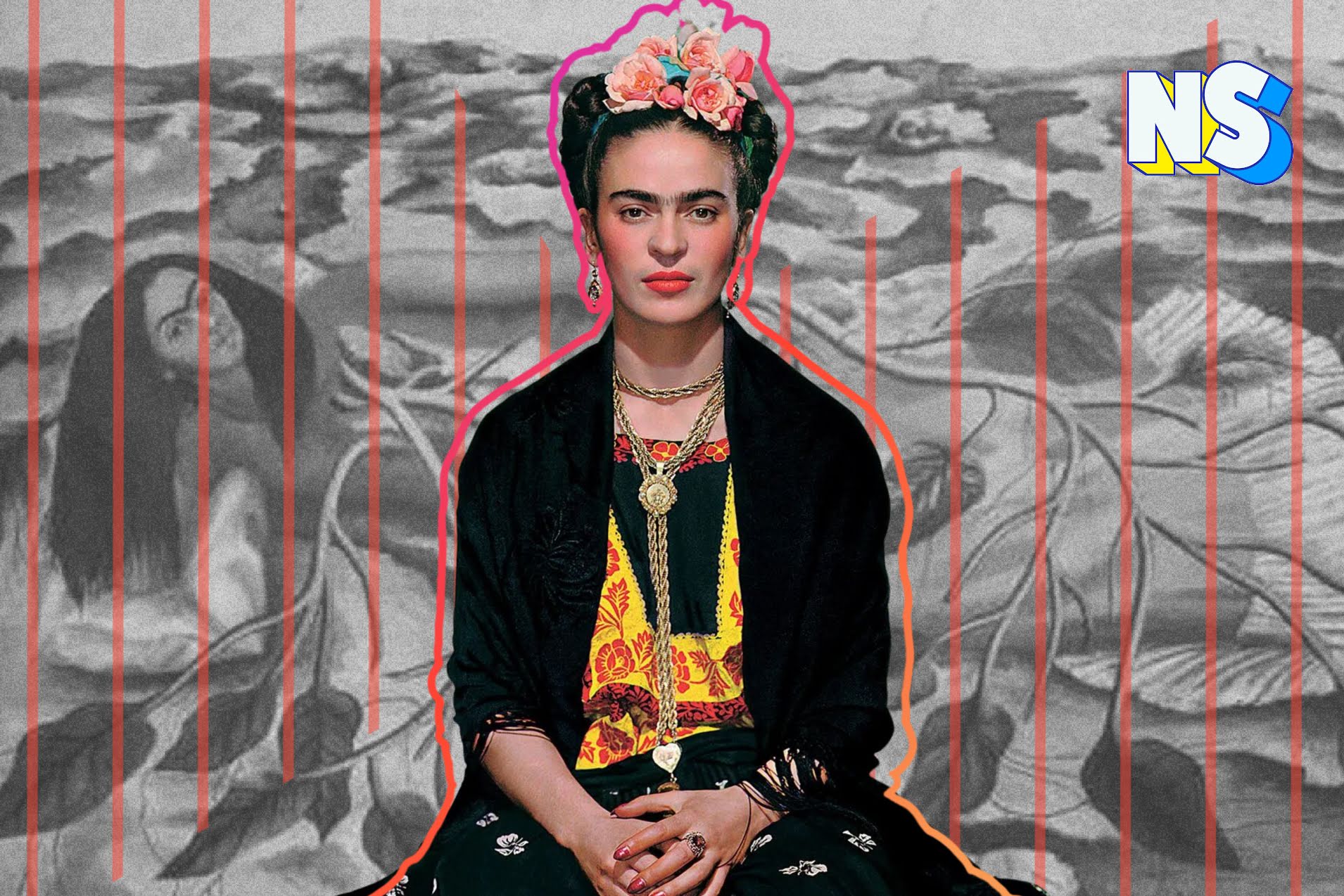 Frida Kahlo is probably one of the most famous Mexican painters in modern history.

Kahlo’s art was a diary of her life – her pain, her loves, her political beliefs, her longings, and her regrets. She painted “the person I know best” and of her 143 paintings, 55 are self-portraits.

A deeper dive into Raíces

Raíces, or Roots, is an iconic self-portrait in oil and one of her best-selling paintings. In 2006, the painting set a new record for Mexican art prices at a Sotheby’s auction selling for 5.6 million dollars. It’s now in a private collection.

In Raíces, 1943, Kahlo painted herself reclining, draped in an orange dress, with thick, green vines emerging out of her body. The ground she is lying on looks parched and cracked.

Her torso looks like an open window that is giving birth to the long vines that wrap around the length of her Tehuana orange dress.

Kahlo paints herself as connected to the earth by thin tendrils that look like veins.

Raíces is also compared to another Kahlo painting, My Nurse and I, where Frida is a baby. In Raíces, it’s a mature Frida feeding the Mexican earth.

The painting follows a constant theme in her work: her inability to have children. She miscarried three times in her life because injuries sustained in a tram crash prevented her from childbirth.

Kahlo suffered from polio, had an abortion, and had her first miscarriage before she was 25. After the accident, she underwent more than 30 operations during her life. Part of her leg was amputated months before she died in 1954.

Read more: Frida Kahlo Is the Original Queen of the Selfie

A brief look into Frida’s life

In 1932, Frida, pregnant, and her husband, Mexican painter Diego Rivera (by then a renowned painter), were in Detroit. Rivera had been commissioned a mural for the General Motors Building.

During their stay, Frida was rushed to a hospital, where she miscarried. Her recovery took two weeks; she turned 25 in a hospital bed.

Her pain of not being able to bear children is evident in a letter she wrote Dr.Leo Eloesser:

“Doctorcito querido: I have wanted to write to you for a long time than you can imagine. I had so looked forward to having a little Dieguito that I cried a lot, but it's over, there is nothing else that can be done except to bear it.”

What Frida did do was express her grief through her work. The self-portrait Henry Ford Hospital is one example.

Kahlo paints herself crying, lying in bloody sheets, naked. She is holding red strings that tie her to floating images – one of them a fetus. The industrial Detroit skyline can be seen far behind her.

According to the information given in the “Diego Rivera and Frida Kahlo in Detroit”, an exhibition at the Detroit Institute of Arts in 2015, Kahlo said the field represented Mexico. She had surrounded herself with the comfort of her homeland.

The loss and desire for motherhood were the inspiration for many of her later self-portraits, including Raíces.